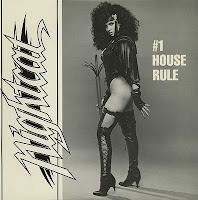 This single is one that reminds me why I enjoy doing these blogs. You just never know what you're going to find out about these artists! I thought this was just a random one off single by some pop tart, but instead Nightcat was a creation of Marvel Comics! Marvel creator Stan Lee wanted to develop a female superhero who crossed over into the real world. Like Dazzler, this hero was also a rock singer. So they released an issue of the Nightcat comic book and hired actress/singer Jacqueline Tavarez to embody Nightcat in real life. They recorded an entire album simply titled Nightcat. This was the only single. Both the comic and album bombed and Jacqueline was fired, she claims because she appeared in a music video by Long Island Lolita Amy Fisher's ex-lover Joey Buttafuoco!! She has since appeared nude in the film Tromeo And Juliet and that's about it. For more on the Nightcat story, go HERE. I would have died for this had I known it existed back in the day, as I was both a music and comic book fiend! As for this song, it's actually a really good dance pop track (like something from Pajama Party, whose 'ghost' vocalist Nikki Gregoroff also has credits on the Nightcat album and is likely the one actually singing this), and the remixes give it a tasty house edge. Apparently the rest of the album is very rock oriented, but I would still LOVE to get my hands on it!

Welcome to The Isle Of Deserted Pop Stars' Lost Pop Treasures. These gems found on the isle are obscure singles released by (mostly) obscure artists. Come dig in and help unearth these lost treasures... While the artists featured on the Isle Of Deserted Pop Stars were very fortunate to have a chance to record an album or two, there are others who didn't even get that chance. So here I will feature singles by artists that only recorded a single or two, as well as singles by artists who are featured on the Isle or may be in the future, and non-album singles. There may even be an obscure single by a more popular artist on occasion. Since there is little info on these artists and I don't have a lot of time, there won't be a lot of info on them here, as I try to provide on the Isle blog. The songs will have to speak for themselves! So please, come in and enjoy the excavation!

As always, you are encouraged to BUY the singles or songs if you can, as the quality will be better and you will hopefully be helping the artist. As far as I know, none of these singles are available any more, but if any artist or record company wishes me to remove their work, please let me know.

Nasty G
I am a life-long music fiend, with a taste for the obscure and cheesy!